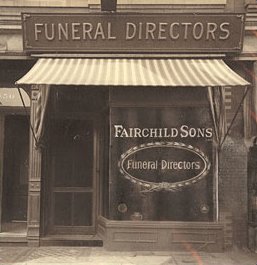 During this time, families typically mourned in the home of the deceased. Earl was an innovator and offered families compassionate personalized service along with a venue to host a memorial gathering. He bought a home on Gates Avenue in Brooklyn and created a warm, welcoming environment for families and friends to grieve their loss.

As future generations took over, the funeral home relocated several times to provide a wider selection of services to more families. First, the expansion was to Lefferts Place, and then into Long Island in 1936.

Earl Fairchild’s heirs, including his son Frank, have carefully nurtured the company’s heritage of innovation while maintaining concern for the comfort of the families they serve. The firm is family owned and operated by James F. Rafferty.